Climate change and poverty have not gone away | Joseph Stiglitz | Business | guardian.co.uk

Climate change and poverty have not gone away 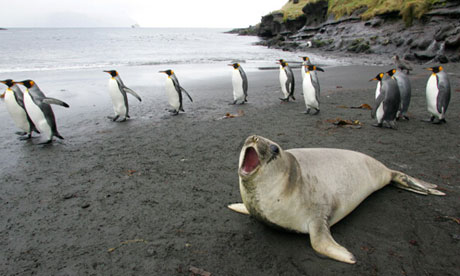 A colony of king penguins and an elephant seal on Possession Island. Because we have been so slow to respond to climate change, achieving the targeted limit of a 2C rise in global temperature will require sharp reductions in emissions in the future. Photograph: Marcel Mochet/AFP/Getty Images

In the shadow of the euro crisis and America’s fiscal cliff, it is easy to ignore the global economy‘s long-term problems. But, while we focus on immediate concerns, they continue to fester, and we overlook them at our peril.

The most serious is global warming. While the global economy’s weak performance has led to a corresponding slowdown in the increase in carbon emissions, it amounts to only a short respite. And we are far behind the curve: because we have been so slow to respond to climate change achieving the targeted limit of a 2C rise in global temperature will require sharp reductions in emissions in the future.

Some suggest that, given the economic slowdown, we should put global warming on the backburner. On the contrary, retrofitting the global economy for climate change would help to restore aggregate demand and growth.

At the same time, the pace of technological progress and globalisation necessitates rapid structural changes in both developed and developing countries alike. Such changes can be traumatic, and markets often do not handle them well.

Just as the Great Depression arose in part from the difficulties in moving from a rural, agrarian economy to an urban, manufacturing one, so today’s problems arise partly from the need to move from manufacturing to services. New firms must be created, and modern financial markets are better at speculation and exploitation than they are at providing funds for new enterprises, especially small- and medium-size companies.

Moreover, making the transition requires investments in human capital that individuals often cannot afford. Among the services that people want are health and education, two sectors in which government naturally plays an important role (owing to inherent market imperfections in these sectors and concerns about equity).

Before the 2008 crisis there was much talk of global imbalances, and the need for the trade-surplus countries, such as Germany and China, to increase their consumption. That issue has not gone away; indeed, Germany’s failure to address its chronic external surplus is part and parcel of the euro crisis. China’s surplus, as a percentage of GDP, has fallen, but the long-term implications have yet to play out.

America’s overall trade deficit will not disappear without an increase in domestic savings and a more fundamental change in global monetary arrangements. The former would exacerbate the country’s slowdown, and neither change is on the cards. As China increases its consumption it will not necessarily buy more goods from the United States. In fact, it is more likely to increase consumption of non-traded goods – such as health care and education – resulting in profound disturbances to the global supply chain, especially in countries that had been supplying the inputs to China’s manufacturing exporters.

Finally, there is a worldwide crisis in inequality. The problem is not only that the top income groups are getting a larger share of the economic pie, but also that those in the middle are not sharing in economic growth, while in many countries poverty is increasing. In the US equality of opportunity has been exposed as a myth.

While the Great Recession has exacerbated these trends, they were apparent long before its onset. Indeed, I (and others) have argued that growing inequality is one of the reasons for the economic slowdown, and is partly a consequence of the global economy’s deep, ongoing structural changes.

An economic and political system that does not deliver for most citizens is one that is not sustainable in the long run. Eventually, faith in democracy and the market economy will erode, and the legitimacy of existing institutions and arrangements will be called into question.

Here, unfair trade agreements – including the persistence of unjustifiable agricultural subsidies, which depress the prices upon which the income of many of the poorest depend – have played a role. The developed countries have not lived up to their promise in Doha in November 2001 to create a pro-development trade regime, or to their pledge at the G8 summit in Gleneagles in 2005 to provide significantly more assistance to the poorest countries.

The market will not, on its own, solve any of these problems. Global warming is a quintessential “public goods” problem. To make the structural transitions that the world needs we need governments to take a more active role – at a time when demands for cutbacks are increasing in Europe and the US.

As we struggle with today’s crises, we should be asking whether we are responding in ways that exacerbate our long-term problems. The path marked out by the deficit hawks and austerity advocates both weakens the economy today and undermines future prospects. The irony is that, with insufficient aggregate demand the major source of global weakness today, there is an alternative: invest in our future, in ways that help us to address simultaneously the problems of global warming, global inequality and poverty, and the necessity of structural change.