How to Live Without Irony (the perils of hipsterdom) 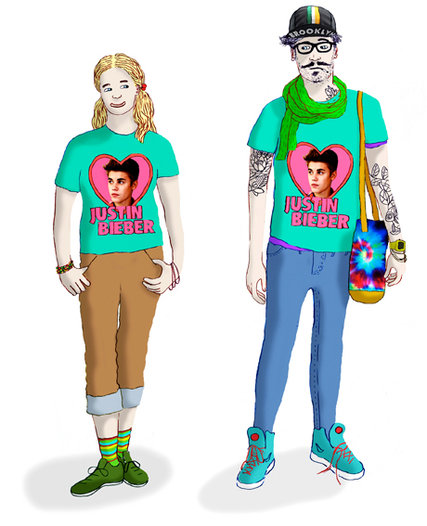 If irony is the ethos of our age — and it is — then the hipster is our archetype of ironic living.

The hipster haunts every city street and university town. Manifesting a nostalgia for times he never lived himself, this contemporary urban harlequin appropriates outmoded fashions (the mustache, the tiny shorts), mechanisms (fixed-gear bicycles, portable record players) and hobbies (home brewing, playing trombone). He harvests awkwardness and self-consciousness. Before he makes any choice, he has proceeded through several stages of self-scrutiny. The hipster is a scholar of social forms, a student of cool. He studies relentlessly, foraging for what has yet to be found by the mainstream. He is a walking citation; his clothes refer to much more than themselves. He tries to negotiate the age-old problem of individuality, not with concepts, but with material things.

He is an easy target for mockery. However, scoffing at the hipster is only a diluted form of his own affliction. He is merely a symptom and the most extreme manifestation of ironic living. For many Americans born in the 1980s and 1990s — members of Generation Y, or Millennials — particularly middle-class Caucasians, irony is the primary mode with which daily life is dealt. One need only dwell in public space, virtual or concrete, to see how pervasive this phenomenon has become. Advertising, politics, fashion, television: almost every category of contemporary reality exhibits this will to irony.

Take, for example, an ad that calls itself an ad, makes fun of its own format, and attempts to lure its target market to laugh at and with it. It pre-emptively acknowledges its own failure to accomplish anything meaningful. No attack can be set against it, as it has already conquered itself. The ironic frame functions as a shield against criticism. The same goes for ironic living. Irony is the most self-defensive mode, as it allows a person to dodge responsibility for his or her choices, aesthetic and otherwise. To live ironically is to hide in public. It is flagrantly indirect, a form of subterfuge, which means etymologically to “secretly flee” (subter + fuge). Somehow, directness has become unbearable to us.

How did this happen? It stems in part from the belief that this generation has little to offer in terms of culture, that everything has already been done, or that serious commitment to any belief will eventually be subsumed by an opposing belief, rendering the first laughable at best and contemptible at worst. This kind of defensive living works as a pre-emptive surrender and takes the form of reaction rather than action.

Life in the Internet age has undoubtedly helped a certain ironic sensibility to flourish. An ethos can be disseminated quickly and widely through this medium. Our incapacity to deal with the things at hand is evident in our use of, and increasing reliance on, digital technology. Prioritizing what is remote over what is immediate, the virtual over the actual, we are absorbed in the public and private sphere by the little devices that take us elsewhere.

Furthermore, the nostalgia cycles have become so short that we even try to inject the present moment with sentimentality, for example, by using certain digital filters to “pre-wash” photos with an aura of historicity. Nostalgia needs time. One cannot accelerate meaningful remembrance.

While we have gained some skill sets (multitasking, technological savvy), other skills have suffered: the art of conversation, the art of looking at people, the art of being seen, the art of being present. Our conduct is no longer governed by subtlety, finesse, grace and attention, all qualities more esteemed in earlier decades. Inwardness and narcissism now hold sway.

Born in 1977, at the tail end of Generation X, I came of age in the 1990s, a decade that, bracketed neatly by two architectural crumblings — of the Berlin Wall in 1989 and the Twin Towers in 2001 — now seems relatively irony-free. The grunge movement was serious in its aesthetics and its attitude, with a combative stance against authority, which the punk movement had also embraced. In my perhaps over-nostalgic memory, feminism reached an unprecedented peak, environmentalist concerns gained widespread attention, questions of race were more openly addressed: all of these stirrings contained within them the same electricity and euphoria touching generations that witness a centennial or millennial changeover.

But Y2K came and went without disaster. We were hopeful throughout the ’90s, but hope is such a vulnerable emotion; we needed a self-defense mechanism, for every generation has one. For Gen Xers, it was a kind of diligent apathy. We actively did not care. Our archetype was the slacker who slouched through life in plaid flannel, alone in his room, misunderstood. And when we were bored with not caring, we were vaguely angry and melancholic, eating anti-depressants like they were candy.

FROM this vantage, the ironic clique appears simply too comfortable, too brainlessly compliant. Ironic living is a first-world problem. For the relatively well educated and financially secure, irony functions as a kind of credit card you never have to pay back. In other words, the hipster can frivolously invest in sham social capital without ever paying back one sincere dime. He doesn’t own anything he possesses.

Obviously, hipsters (male or female) produce a distinct irritation in me, one that until recently I could not explain. They provoke me, I realized, because they are, despite the distance from which I observe them, an amplified version of me.

I, too, exhibit ironic tendencies. For example, I find it difficult to give sincere gifts. Instead, I often give what in the past would have been accepted only at a White Elephant gift exchange: a kitschy painting from a thrift store, a coffee mug with flashy images of “Texas, the Lone Star State,” plastic Mexican wrestler figures. Good for a chuckle in the moment, but worth little in the long term. Something about the responsibility of choosing a personal, meaningful gift for a friend feels too intimate, too momentous. I somehow cannot bear the thought of a friend disliking a gift I’d chosen with sincerity. The simple act of noticing my self-defensive behavior has made me think deeply about how potentially toxic ironic posturing could be.

First, it signals a deep aversion to risk. As a function of fear and pre-emptive shame, ironic living bespeaks cultural numbness, resignation and defeat. If life has become merely a clutter of kitsch objects, an endless series of sarcastic jokes and pop references, a competition to see who can care the least (or, at minimum, a performance of such a competition), it seems we’ve made a collective misstep. Could this be the cause of our emptiness and existential malaise? Or a symptom? 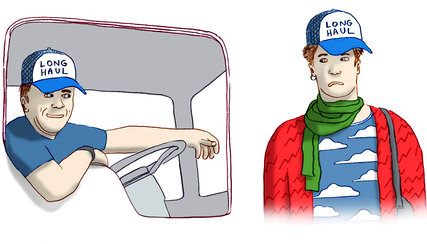 Throughout history, irony has served useful purposes, like providing a rhetorical outlet for unspoken societal tensions. But our contemporary ironic mode is somehow deeper; it has leaked from the realm of rhetoric into life itself. This ironic ethos can lead to a vacuity and vapidity of the individual and collective psyche. Historically, vacuums eventually have been filled by something — more often than not, a hazardous something. Fundamentalists are never ironists; dictators are never ironists; people who move things in the political landscape, regardless of the sides they choose, are never ironists.

Where can we find other examples of nonironic living? What does it look like? Nonironic models include very young children, elderly people, deeply religious people, people with severe mental or physical disabilities, people who have suffered, and those from economically or politically challenged places where seriousness is the governing state of mind. My friend Robert Pogue Harrison put it this way in a recent conversation: “Wherever the real imposes itself, it tends to dissipate the fogs of irony.”

Observe a 4-year-old child going through her daily life. You will not find the slightest bit of irony in her behavior. She has not, so to speak, taken on the veil of irony. She likes what she likes and declares it without dissimulation. She is not particularly conscious of the scrutiny of others. She does not hide behind indirect language. The most pure nonironic models in life, however, are to be found in nature: animals and plants are exempt from irony, which exists only where the human dwells.

What would it take to overcome the cultural pull of irony? Moving away from the ironic involves saying what you mean, meaning what you say and considering seriousness and forthrightness as expressive possibilities, despite the inherent risks. It means undertaking the cultivation of sincerity, humility and self-effacement, and demoting the frivolous and the kitschy on our collective scale of values. It might also consist of an honest self-inventory.

Here is a start: Look around your living space. Do you surround yourself with things you really like or things you like only because they are absurd? Listen to your own speech. Ask yourself: Do I communicate primarily through inside jokes and pop culture references? What percentage of my speech is meaningful? How much hyperbolic language do I use? Do I feign indifference? Look at your clothes. What parts of your wardrobe could be described as costume-like, derivative or reminiscent of some specific style archetype (the secretary, the hobo, the flapper, yourself as a child)? In other words, do your clothes refer to something else or only to themselves? Do you attempt to look intentionally nerdy, awkward or ugly? In other words, is your style an anti-style? The most important question: How would it feel to change yourself quietly, offline, without public display, from within?

Attempts to banish irony have come and gone in past decades. The loosely defined New Sincerity movements in the arts that have sprouted since the 1980s positioned themselves as responses to postmodern cynicism, detachment and meta-referentiality. (New Sincerity has recently been associated with the writing of David Foster Wallace, the films of Wes Anderson and the music of Cat Power.) But these attempts failed to stick, as evidenced by the new age of Deep Irony.

What will future generations make of this rampant sarcasm and unapologetic cultivation of silliness? Will we be satisfied to leave an archive filled with video clips of people doing stupid things? Is an ironic legacy even a legacy at all?

The ironic life is certainly a provisional answer to the problems of too much comfort, too much history and too many choices, but it is my firm conviction that this mode of living is not viable and conceals within it many social and political risks. For such a large segment of the population to forfeit its civic voice through the pattern of negation I’ve described is to siphon energy from the cultural reserves of the community at large. People may choose to continue hiding behind the ironic mantle, but this choice equals a surrender to commercial and political entities more than happy to act as parents for a self-infantilizing citizenry. So rather than scoffing at the hipster — a favorite hobby, especially of hipsters — determine whether the ashes of irony have settled on you as well. It takes little effort to dust them away.